Part of the process for building a frog pond at school was deciding which fish to introduce. Extensive research was undertaken to identify a local, native fish species that would control mosquito larvae without eating frogs eggs or tadpoles. 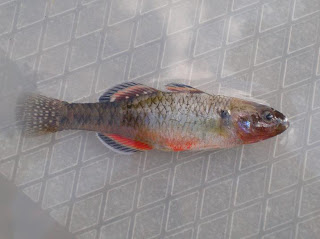 Of these, only the Firetail Gudgeon is considered frog-friendly and not needing saltwater for part of its life-cycle so it would be the most suitable species for the school pond.

However, if fish of this species were sourced from aquariums they might have come from warmer climates and may not be acclimatised to Sydney outdoors! The species for our school pond will be sourced locally with the help of Canterbury Council and NSW Fisheries.

Firetail Gudgeon occur in streams, ponds, swamps and drains, usually among aquatic weeds. Juveniles feed on zooplankton while adults feed on insects, larvae and small crustaceans. They breed between October and January in response to rising water temperatures. Male colouration intensifies at this time. Eggs are laid underneath rock ledges, logs or leaves and are guarded and fanned by the male parent until hatching, 3-5 days later.

Activity - Divide the class (Yr 6) into small groups. Give every group the following set of criteria.

Give each group a different fact sheet for a particular species. Or get them to google the species for homework.

Ask groups to present the case for or against their species being introduced to the school's eco pond.