The Eco Learning Area (ELA) is a P&C initiative to change an abandoned area of the school grounds into an area for learning about nature and the environment. Several working bees and many additional volunteer hours by dedicated parents have seen a great transformation over recent months. 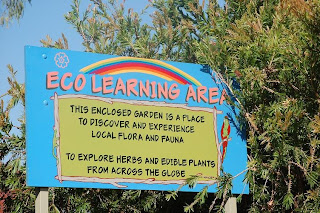 The ELA features an eco pond built by year 6 in 2006. The project for 2007 was to convert this pond into frog-friendly habitat.

Here is an early stage of herb spiral construction; hard yakka weeding the spiral and relocating a giant ironbark log; and its resting place as a seat by the eco-pond. 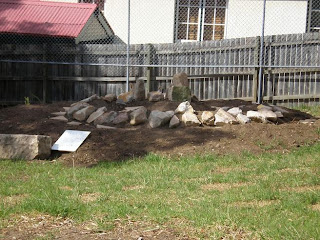 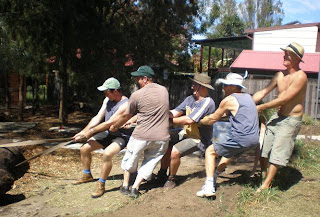 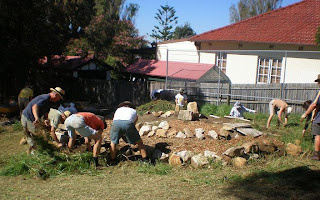 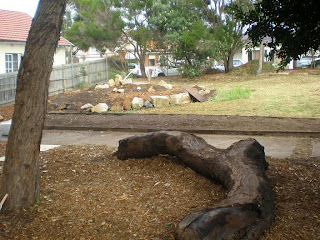 The official opening of the ELA will happen in May but it has already been used for learning in a number of ways. On Harmony Day the herb spiral and vegie gardens were planted by students. There have been excursions from the classroom to the Fungi Patch.

And then there's the spontaneous learning that this area invites: on a recent working bee the young children were drawn to the eco pond as two boys from year 1 talked spontaneously about mosquito larvae. 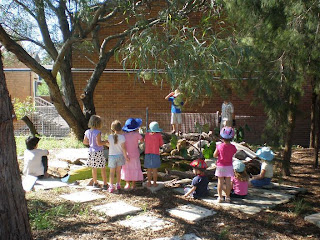 As an extension of enjoying nature at school we have invited parents and children on bushwalks in the nearby valley. 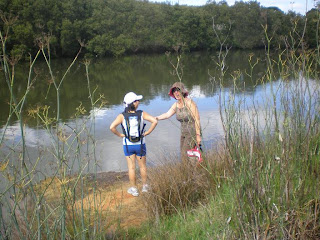 The inaugural Ferncourt bushwalk set out on 2 March and there are now five reliable witnesses (including one school principal) to attest that there is a wealth of bush within walking distance from the school. Walkers encountered mangrove swamps, fern-lined gullies and Angophora (Sydney Red Gum) forests. There were unique geological formations, all manner of spiders and for the bird watchers: pied cormorants, blue wrens and red-browed finches. The walk took 1.5 hours.

The second walk was intentionally shorter so that children could participate. And although the distance covered was greatly reduced, the walk nevertheless took two hours as the children stopped to examine every millipede, bug and fungus that appeared after recent rain. There was much shouting with enthusiasm at every new discovery so it was not the ideal day for locals to have a quiet moment with nature. But the walkers we encountered seemed very approving of youngsters getting involved. 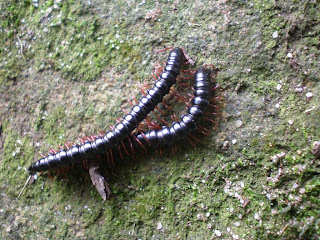 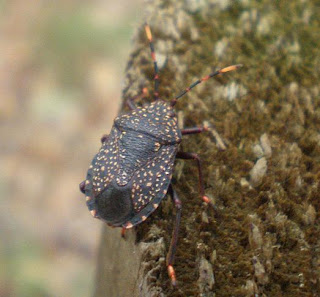 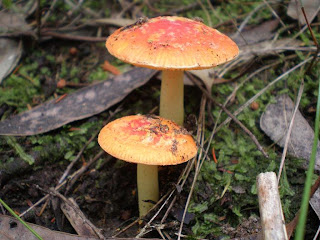 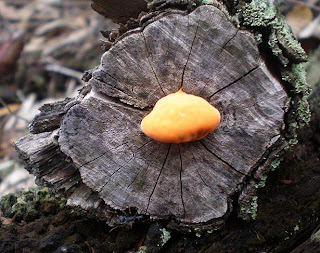 The children were fearless and agile climbers who braved the top of Nannygoat hill to enjoy the fabulous view. 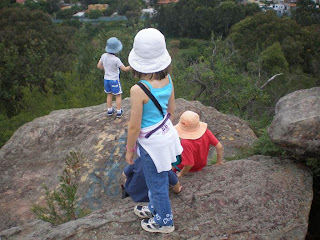 A magnifying glass proved essential equipment for the studies that were undertaken! 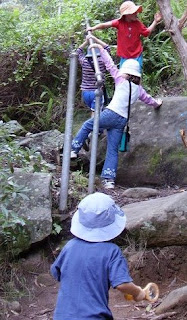 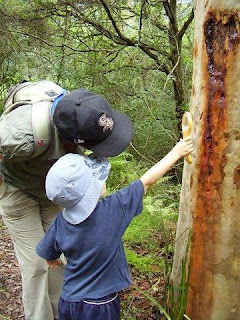 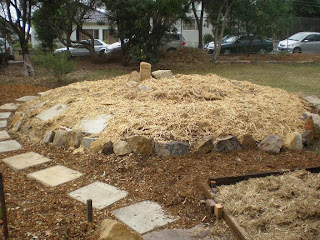 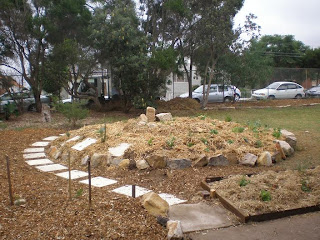 As our herbs grow together in one spiral they will provide food and shelter for a variety of creatures, from small insects to large lizards.

This is harmony in nature. 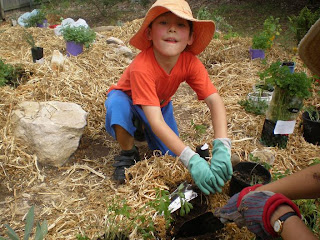 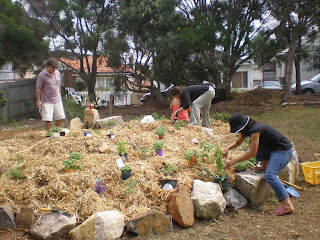 This diverse garden bed is a physical symbol of cultures existing and working together in harmony.

This is harmony in society. 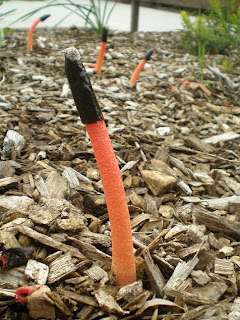 Fungi season announced itself at school with the arrival of some bright red, smelly stalks in a bark-mulched garden bed. These were Stinkhorns (Phallus rubicundus) and caught many a curious eye.

Closer inspection revealed other kinds of fungi growing in the same bed which has since been dubbed the Fungi Patch.

Stinkhorns grow out of the leaf litter on rainforest floors. The spores for the fungi at school have arrived in the bark mulch and will keep appearing when the conditions are just right. They grow very quickly and usually shrink and disappear by the end of the day.

Stinkhorn fungi produce spore slime, which has a yucky, rotting smell, just perfect for attracting flies. Flies and other insects land on the sticky slime and carry spores away on their feet thus spreading them to the places that they land.

Experiment: Using a magnifying glass, see how many different kinds of flies and insects land on the spore slime.

Experiment: Visit the stinkhorns in the morning and afternoon and see how quickly they grow and then collapse.

Another fungi can be seen all over this garden bed, if you look very closely. It is the Birds Nest Fungi.

Bird's nest fungi normally grow on manure or decaying wood. They have also arrived on the bark mulch and set up home at school.

The spores in this fungi are held inside hard, egg-like casings called peridioles. The way they are spread is by drops of water splashing into the "nest" and causing the "eggs" to eject up to a metre away. They have a sticky case which helps them to cling on to surfaces where they land, sometimes on furniture and houses. If animals eat leaves that the spores have stuck to this will help spread the fungi even further away. 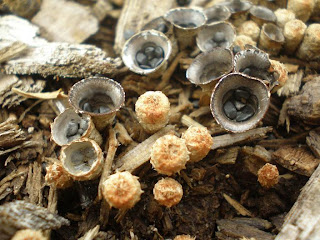 These fungi are rarely noticed because they are so small - usually less that 1cm high and wide. In this photo, the light brown ones are the newest. You can see some that have just started to open and are quite moist inside. The oldest have the black peridioles and are just waiting for a splash of water.

Experiment: try using an eye dropper to drip water into the "nest" and see if the spores eject.

There are several types of capped fungi in this garden bed too. This is the most familiar type of fungus and has very straightforward design features. The stalk holds the spores up above the damp ground and the cap keeps them dry, just like an umbrella. The spores are kept inside the gills until they're ready and then they drop to the ground to grow more fungi. 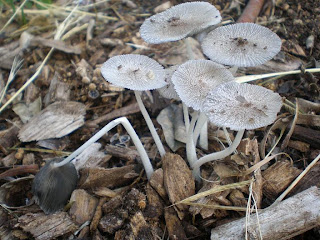 The first image shows a delicate grey fungi species (Coprinus) that are very short lived. The one on the left has already started to deteriorate. 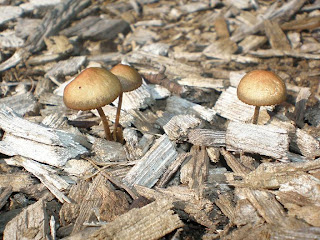 The second picture is a small brown toadstool. 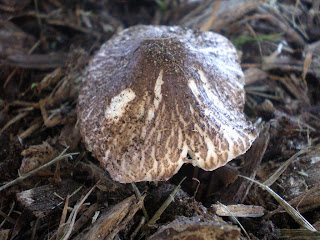 The 3rd picture shows a large mushroom that was relocated to the Fungi Patch from elsewhere in the ELA. It may not survive in the new environement but look out for it in the shade of the centre log. The last image is of a minute capped fungi that was almost too tiny to see with your eyes.

You can read more about fungi here and see hundreds of photos of different fungi species.
Posted by Voren at 7:45 PM