Most people are familiar with the most common bee in Australia, the honey bee (Apis mellifera). What they might not know is that this species was introduced to Australia from Europe in about 1822 to ensure that the new colony had plenty of honey. 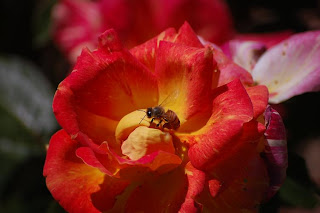 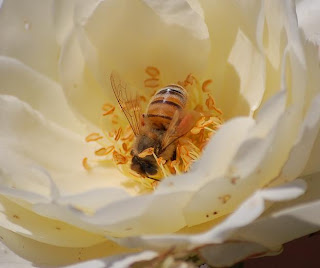 You might wonder why this happened if you knew that Australia has over 1500 species of native bees.

But most of Australia's native bees are solitary bees. They do not live in hives with groups of bees but individually create burrows to raise their young. With burrows scattered across all sorts of locations in the ground, in sandstone, in leaves, in hollow wood and even in the walls of houses it would be difficult to source their honey for human consumption.


Since the establishment of the Eco Learning Area, many different species of native bees have been observed at the school. Following are some examples from school. Follow the hyperlinks to external websites with more information and extra photos.

The Blue banded bee is a solitary bee. It is smaller than the honey bee and less aggressive. Even so, it can give a mild sting if touched or trodden on. These ones are pictured on tiny flowers in the herb spiral. The distinctive blue bands can be seen clearly in this image (photographed in the Wolli Valley). 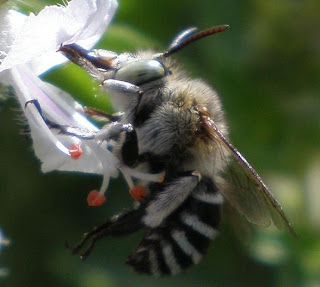 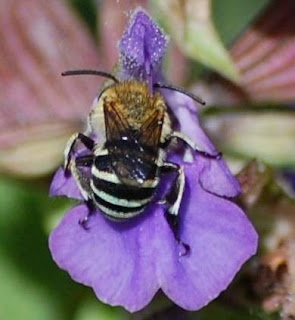 This next bee is one you probably haven't noticed... they are only about 4mm long! Trigona are one of the stingless bees. The images below show the size of Trigona in relation to a brocolli flower in the herb spiral and a dandelion in the Wolli Valley. Australia has 10 species of social bees which have the added bonus of being stingless! These are becoming increasingly popular as pets! You can buy a hive of native stingless bees for your garden. They are very important pollinators of native flowers. Some Australian plants are so unique they can only be pollinated by native bees. 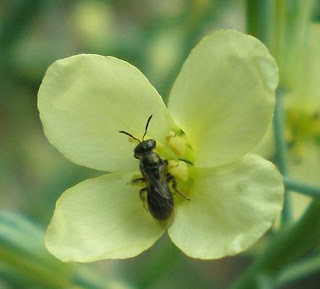 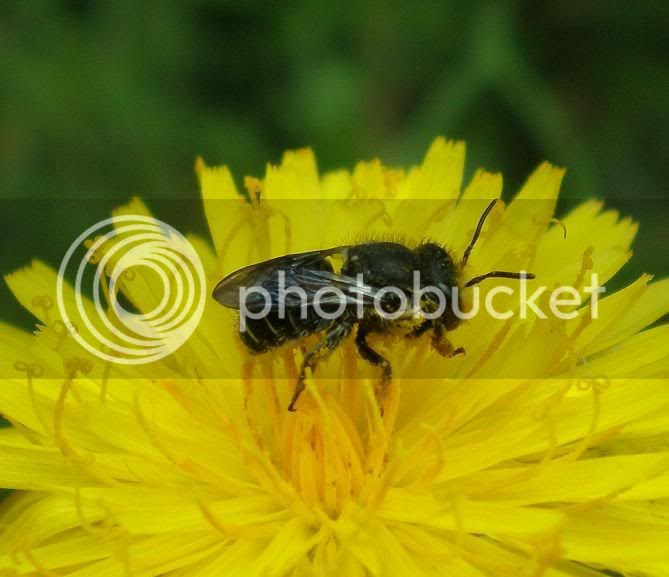 The following bee, pictured on the tiny yellow flower of a brocolli plant could be Rayment's Red Bee (Lasioglossum hiltacum) but there are several similar bees in the Sydney region that also match. 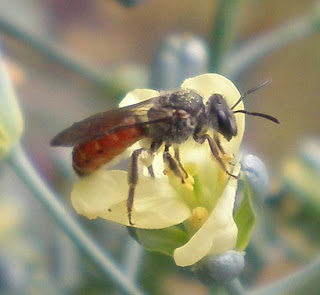 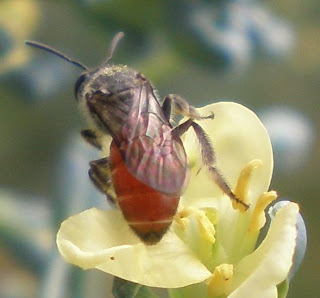 Notice the pollen on its shoulders (click to enlarge image). Other bees accumulate pollen on their legs and abdomens (see below). And the colour of the pollen differs dramtically between flowers. 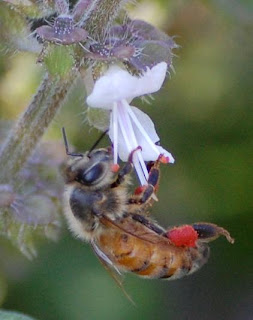 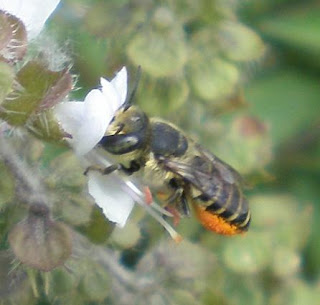 This next bee is thought to be the Gold-Tipped Leafcutter (Megachile chrysopyga). Leafcutter bees, as the name suggests, cut sections out of leaves to make nests for their young. 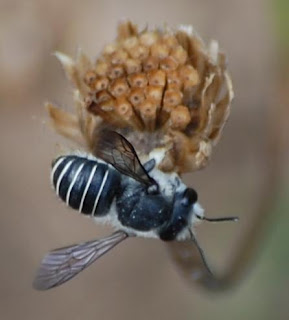 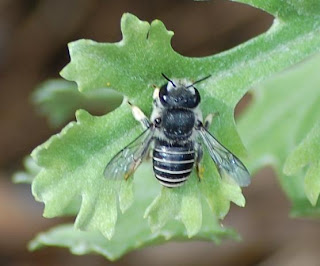 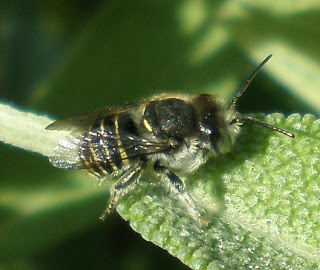 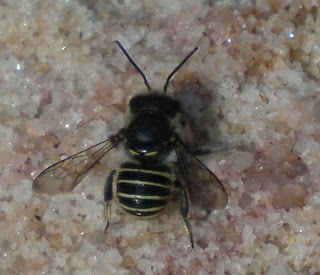 This drinking bee (below) is a Nomia, probably a Green and Gold Nomia (Lipotriches australica). Despite the very social look of the second photo these are solitary bees. A female bee will either build a nest, lay and care for her own eggs OR share a nest with other females but still care for her own eggs. While the females nest in the ground or in rotting wood, males simply cluster together at night. These males can often be seen in the warmer months gathered on a stem of lavender in the mint bed near the herb spiral. 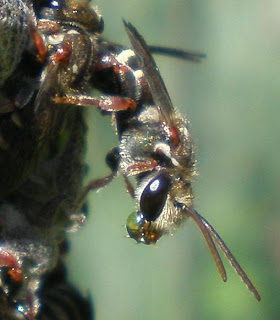 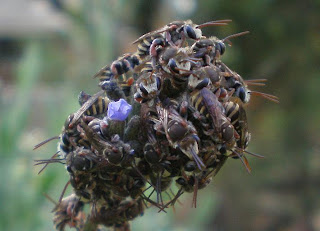 The most spectacular bee so far observed in the ELA is the Neon Cuckoo Bee (Thyreus nitidulus). A cuckoo bee does not bother with building its own nest but lays its eggs in another bee's nest. This bee has the most spectacular iridescent blue colour in flight. It doesn't land for long so keep your eye out for a bright blue blurr! 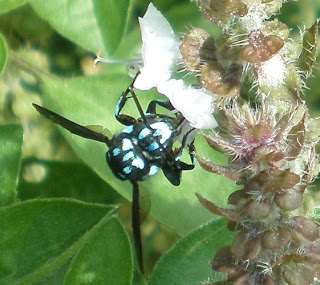 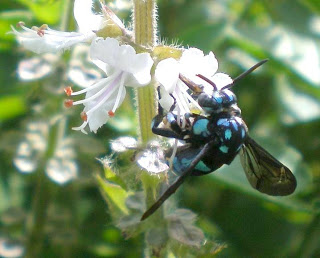 One last species seen in the ELA is the very cute but very elusive Teddy Bear Bee. This bee is also a solitary bee that nests in shallow burrows in the ground. The name comes from their fat, furry bodies. They have one distinct dark stripe across their russet-coloured abdomen. 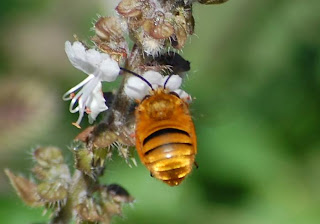 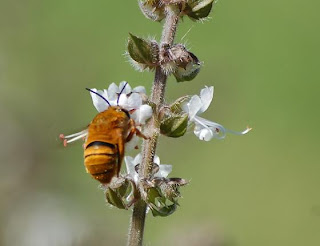 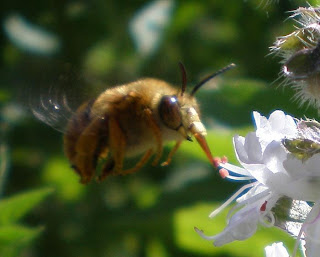 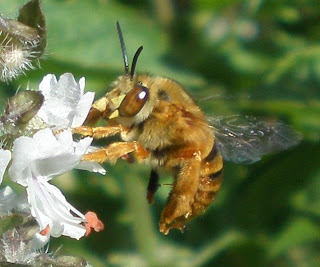 Or visit this site to learn how to attract native bees to your garden and this site to find out what bees you can expect to find in your area.