The May Fair successfully raised funds to improve the school grounds and upgrades were considered most needed in Playground C. In addition to this, the Environment Sub-committee (ESC) had negotiated for mass native planting to be donated by Transgrid under their Greengrid initiative.

With money and plants ready to go we nevertheless wanted to take our time to get it right. Year 3 undertook a design project that consulted students and came up with a comprehensive plan for playground improvement as part of the Kids’ Design Challenge in Term 3, 2007.

Here is the 3-D model of their proposal: 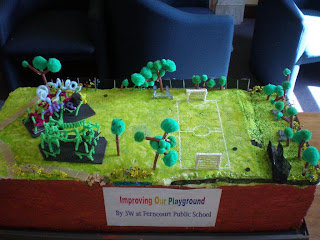 3W students questioned students in each class about their playground and activity preferences and, specifically, their likes and dislikes about Playground C. For 75% of Ferncourt students, this is their favourite playground.

The class developed the following design brief for improvements to Playground C which:

Overall a majority of students approved all five suggestions. The most popular change was a second set of equipment and the least popular was the new Greengrid planting. 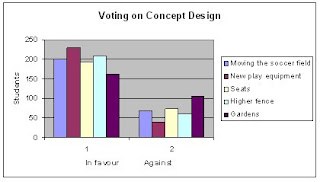 This close up shows the existing trees, interspersed with low-growing native plants around the perimeter. The soccer posts are re-oriented and the fence raised to prevent lost soccer balls! 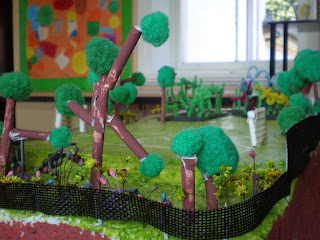 There were also plans for a additional set of play equipment although it should be noted that Yr 3 were not working to a budget and the ESC had discovered through their research that even a small piece of play equipment would quickly exhaust available funds. 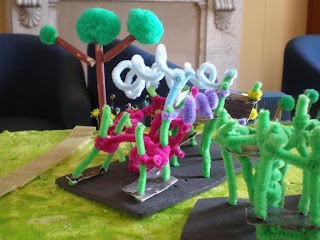