On 19 September 2007, the whole school celebrated World Environment Day with an excursion to Girrahween Park in the Wolli Valley. From this central location, 12 separate groups had guided bushwalks and experienced nature-based activities in their spare time.

Respect to Country
We acknowledge the traditional owners
of the land on which we live and learn.
We pay our respects to them for their care
of this land over countless generations.
We hope they will walk with us on our journey.
The guided walks covered different aspects of the built and natural environment. Older classes went as far as Turrella Reserve and Nannygoat Hill to the North or Illoura Reserve to the South. Younger classes explored the Bray Ave wetland, Paperbark Creek or the interesting features of Girrahween Park itself including a de-nutrification wetland. 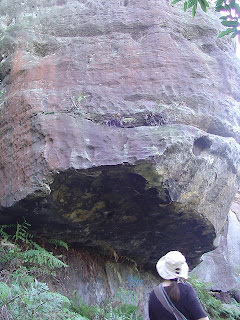 Shelter under rock escarpments with evidence of smoke from Aboriginal cooking fires. 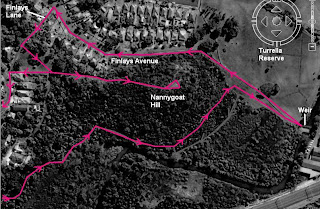 Students walking to Turrella Reserve saw rock shelters used by the Bidjigal people and saw remnant vegetation that has been restored to how it might have looked in Aboriginal times. They saw paperbark trees used for Aboriginal huts, canoes, food wrapping and toys. They learned Aboriginal place names:

The Turrella Weir was identified as the divide between fresh water on right and tidal salt water on left. Different species occur downstream to upstream. Plants include mangroves, saltmarsh and casuarinas on the tidal side. Native fish such as Sea Mullet, Port Jackon Perchlets and Eels are found in the saltwater side. In the freshwater side there are various species of gudgeon.

Turrella Reserve had been wetlands full of reeds and subject to flooding then later Chinese market gardens but Council filled in the area to create parkland. It still functions as water bird habitat to some extent.

At Nannygoat Hill students observed the proximity of gardens to bushland, enabling the spread of weeds and exotic plants like “Mother of Millions”. They also learnt about stormwater issues: the streets here (Minnamorra etc) drain into Wolli Creek (so does rubbish) . 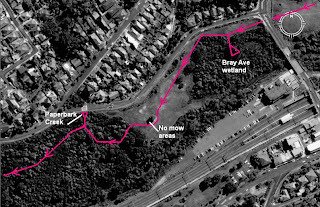 Students who walked towards Bexley found an area still needing much bush restoration and regeneration and saw the effects of garden plants becoming invasive weeds.

Bray Avenue Wetland was seen as a haven for birds; much bush regeneration has been undertaken and Canterbury council have made efforts to control stormwater.

Students observed a “no mow” area which allows native seedstock to grow where it belongs. These have been established by volunteer bush regenerators with the co-operation of Council.

European history: A road reservation relating to this stretch of land meant that the bushland was subject to years of neglect (compare to Girrahween Park which is well maintained by NPWS). Prior to the road reservation, Kings Farm existed (near Bexley end of track). 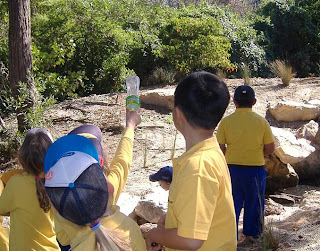 "De-nutrification" is a big word! so lets break it down. We've all heard about nutrients and are often told about having nutritious food instead of junk food. Nutrients make things grow. They’re good if they’re in our food but not so good in our waterways.

Too many nutrients make water plants grow too fast and too big.

Why is this bad?

Water gets oxygen from the air (waves and wind help stir it in).
Fish need that oxygen in the water.

BUT, if plants cover the water, they stop the oxygen from dissolving in the water, so fish die.

Rotting dead plants take even more oxygen out of the water.

HOWEVER, if we are clever, we can use this system to clean up our dirty water. We must simply keep the water flowing and harvest the plants to keep them from growing too big.

Look upstream from the bridge: Here we can see water flowing down from a stormwater outlet near the Earlwood shops. It’s bringing some pretty rich nutrients with it!

The reeds have been planted to eat up the nutrients and stop so much getting into Wolli Creek (downstream from the bridge).

So, de-nutrification is just a big word that means taking the nutrients out. This makes Wolli Creek healthier.

Wetlands were long regarded as wastelands but are now recognised as important features in the landscape that provide benefits for people and other animals. Wetlands are home to an abundant variety of plants, water bugs, reptiles, birds, fish, frogs and mammals - they are considered to be 'biological supermarkets'. They are among the most productive environments in the world and form a link between our land and water resources.

Stormwater comes from urban areas after rain. As water flows across roads and other hard surfaces it can pick up pollution such as rubbish, chemicals and sediment. This polluted stormwater can be caught and filtered by constructed wetlands before it enters a waterway.